Cherry tomatoes have the name “Cherry” because they are mostly red-cherry hues in color. In backyard settings, cherry tomatoes can turn different colors based on the amount of nursing the plants receive, direct or indirect nursing. Instead of just cherry red in color, the cherry tomatoes yields are in hues of yellows, oranges, purple and greens. Each shade of the fruits has a slightly different taste. This is great for unique recipes.

The main ingredient of the backyard garden setting is the airflow levels within and around the garden’s spaces.

Airflow levels are a combination of the following factors:

The distance between each plant.

Spacing between each cherry tomato plant needs to be at least 2-3 feet apart to increase yields and to allow room for root growth. With root production levels expanding, other plants other than tomatoes can sit near those roots. One example is Marigold Flowers near tomatoes plants. Marigolds enhance tomatoes and tomatoes enhance marigolds.

The number of surrounding plants and shrubs nearby or in the yard.

Some shrubs block airflow even though they’re not sitting directly in the garden. Plant cherry tomato plants so that each plant is getting 2-4 sides of airflow without obstruction of wind flow to the plants. Some young seedlings can be moved to other areas within the garden for greater airflow.

The amount of fencing near the garden or surrounding the garden area. Fencing with lattice opening allows for airflow to the garden.

Fencing near and around the garden can change how rapid the plant’s fruit production ripens. Depending on the openings in the fencing, plant production can yield large amounts of fruit, but can be slow to ripen on the vine. Plants can yield a large amount of green cherry tomatoes.

The number of structures near the garden.

The amounts of sheds, garages, and other housing units near gardens can cause airflow blockage to the gardens. In these gardening units try to keep at least two sides of the gardens with plenty of airflow.

The number of trees near the garden area.

Trees provide shade with partial sunlight to the garden. Tomatoes like at least six hours of full sunlight per day. Even with trees, some areas of the garden still receive full sunlight during the day.

Cherry tomatoes are a good treat right out of the garden.

Germinate seeds in good soil in warm weather after the last frost. Germination time vary, two to six weeks. Transplant seedlings to the gardening area. Allow room between plants for other flowers and crops.

Sprinkle the planting area with powder milk about every two weeks after sowing the early seedlings in good soil to increase the tomatoes plants’ yields.

If cold weather, germinate plants indoors six weeks to two months prior to planting the seedlings or the full-grown plants in the gardening area.

Cherry Tomatoes in hues of yellows, oranges, red and purples

Season with a no salt seasons, or season salt or seasons of choice.

In bowl, cut tomatoes in halves or thirds, season to taste, bread with cornmeal of flour. Fry in oil on low to medium heat. Brown on both sides. Drain oil. Serve in a sandwich or as a side dish.

Makes 4 sandwiches with lettuce and mayo, or 8 ½ cup servings.

With extra high yields, tomatoes can be canned or frozen for later use in recipes during the non-planting seasons of the year. 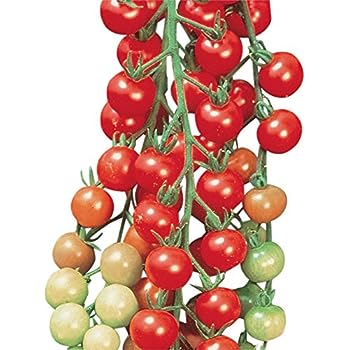 As an Amazon Associate, I earn from qualifying purchases.

Product prices and availability are accurate as of the date/time indicated and are subject to change. Any price and availability information displayed on [relevant Amazon Site(s), as applicable] at the time of purchase will apply to the purchase of this product.

We are a participant in the Amazon Services.com LLC Associates Program, an affiliate advertising program designed to provide a means for us to earn fees by linking to Amazon.com and affiliated sites.